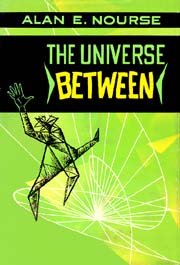 Nourse, Alan E. The Universe Between
Summary: Attempts to create a matter transmitter to facilitate large-scale transfer of resources between planets disrupts a universe through which the transfer occurs.
Comments: Allohistorical content is almost nil, as the bulk of the book maintains that the second universe differs in its number of spacial dimensions. It is not until nearly the end of the book that a few sentences indicate that it is an historically different Earth in which, e.g., the American colonies never broke away from England.
Published: McKay 1965; Paperback Library 1967; Ace 1987 (0441854567BUY).
Published: Expanded from "High Threshold", in Astounding, March 1951, Omnibus of Science Fiction (ed. Groff Conklin), Crown 1952, Strange Travels in Science Fiction (ed. Groff Conklin), Grayson 1953; and "The Universe Between", in Astounding date unknown 1951.