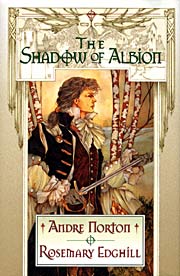 Norton, Andre, and Rosemary Edghill. The Shadow of Albion. Tor 1999.

Norton, Andre, and Rosemary Edghill. Carolus Rex
Divergence: 1685 CE
What if: Charles II declared as he was dying that the protestant Duke of Monmouth was his legitimate son, and the Stuarts held the throne of England into the 19th century. Also, magic works.
Series note: Series including The Shadow of Albion and Leopard in Exile.

Norton, Andre, and Rosemary Edghill. The Shadow of Albion
Divergence: 1685 CE
Summary: A woman is drawn from the 1805 of our world into another world as a replacement for the dying Marchioness of Roxbury, there finding herself betrothed to the Duke of Wessex and embroiled in England's attempts to seal an alliance with Denmark against Napoleon's France.
Series note: First volume of Carolus Rex.
Published: Tor 1999 (0312864272BUY), 2000 (0812545397BUY); SFBC 1999.