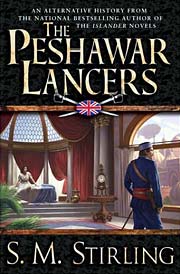 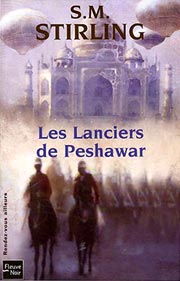 Stirling, S.M. The Peshawar Lancers
Divergence: 1878 CE
What if: A stream of meteorites struck Earth from Moscow westward to the Rockies during the late 19th century, destroying much of European and North American civilization and forcing the surivorss to rebuild in what had been outposts and colonies.
Summary: In 2025, with civilization about recovered to its pre-Fall level, a plot is afoot to bring down the New [British] Empire, and a family from Kashmir is for some reason the key to doing so.
Series note: A novella set in this same timeline is "Shikari in Galveston", q.v.
Published: NAL/Roc 2002 (0451458486BUY), 2003 (0451458737BUY).
Original in: English.
Translation: French by Edith Ochs as Les Lanciers de Peshawar, Fleuve Noir 2004 (2265077046).
Awards: Finalist: 2002 Sidewise Award for best long-form alternate history.